We have accumulated so many DVDs throughout the years that I don't really know what to do with them. Well, let me make that "children's DVDs". Yep, most of the DVDs are the little one's and she just wouldn't let them go.

Up until about a week ago, they were still in the box but I finally had the chance to take them out and I really don't know where to put them. Right now they're in the armoire in our bedroom but sooner or later they would have to be moved.

I told the husband about it and he said to pack them and send them to the Philippines...for my niece's children. Hmmm...maybe that's a good idea. Now all I have to do is find 'that' chance when the little one is not looking so I can sneak them out.

Oh we just got her 5 more about 2 weeks ago...and there's more coming. Although the ones we're going to buy next are educational ones. Sigh...looks like there's really no end in sight as far as this problem goes, eh?

Here are last 5 we got for her...she already watched them..over and over again. 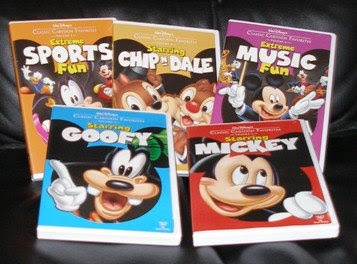 Jul if those are DVDs it won't work in the Philippines because of the zoning ba yon. One kasi tayo dito then 2 yata sa Asia. Nagpadala din kasi ako from here pero sayang hindi nag work.