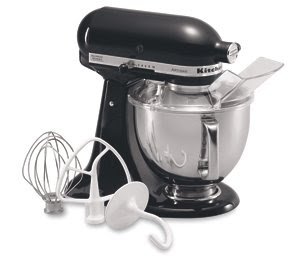 This is what the husband brought home last night...a KitchenAid Stand Mixer . I asked him to go to Linen 'n' Things to look for a robe for the little one and to get some towels as well because they're really cheap [like 4 bucks each for the bath towels]. While he was there he called me to tell me that they don't have the robe but he got the towels....then mentioned that the stand mixers are now 20% off. Followed with: "Should I get one already? Maybe they won't have it anymore next week and we won't find it at this price. " So I gave him the go signal to go get it already.

Now, is it a late [additional] birthday present? Or is he telling me something? Maybe bake him a cake or something? Ha! I got the mixer and that's all that matters, right?
at November 04, 2008

i have cooking gas saving tips on my blog. you might want to check it out.

hi juls! nothing much happened on halloween here... just the same ordinary day for me and the kids. wasn't able to pay respects to our dead cause they're in luzon, mahal ng pamasahe eh. am still the same though... i accepted already the fact that what i'm going through right now will eventually come to pass, which, btw is my constant prayer. anyway, on the "new" mixer... isa lang ibig sabihin nyan. gusto magpa-bake ng partner mo ng cake, that, i'm pretty sure of. so! better get the mixer humming and create a culinary masterpiece na hindi niya makakalimutan and with a kapampangan doing it, WOW! update mo na lang ako on the results of whatever it is that you will be baking. (gugutom tuloy ako, hehehe) thanks for everything juls! GbU! ciao!

that's kitchenaid! one of the items in my wish list. i used to own one but it broke down and "died". the best mixer yan - pwede ng pang commercial baking.

as for your comment: my dear, i thought magkasunod lang tayo din, that's what i have been thinking but reading your post about your bday false alarm ako.. hehehe.. sige lang.. 7th ako te juls...

i love the fascinating weather and the plunging of snows they are just amazing talaga, as in, i love it when i was outside? kasi i can see my breath and i'm making fun of it.. hahahaha....

have this one in my housetoo. hubby 's christmas present two years ago and i love it! am sure you will love it, too!