Sort of. Our Saturday was spent at home but I had to do some work...so what else is new. As usual, we had a deadline to beat so even if I was didn't feel like working, I did. The husband and I originally planned of going out to get the little one's Christmas dress but because of my work and how I was feeling, we decided to just go out today.

Christmas shopping is done now. All that's left for me to do is the wrapping part. I usually wrap the little one's presents on Christmas eve...after she went to bed. Our tree is pretty much void of any gifts before that as she still 'believes' it's Santa that gives her presents. For how is the question. I have a feeling though that this will be the last year that she's going to believe.

As for the husband and the wife...we already exchanged gifts. We gave each other...toys! 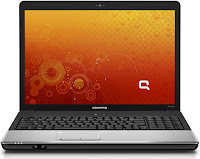 Email ThisBlogThis!Share to TwitterShare to FacebookShare to Pinterest
Labels: Christmas gifts, Life and Anything in between

Now you can do more jobs at a time with laptop on your left and another one on your right. Presenting J, as the ... Super Woman! He he..

That's a nice video cam. For sure your hubby will shoot all the li'l one's movements.

Well done! I got a desktop from Hubby about two years ago. Hubby needs a new laptop very badly. His old one is slow as a turtle, it's very old. About six years.

Have a great week ahead Jul.

wow mommy j, dami mo na sigurong gadgets ano.. i hope my hubby will give me a toy like that too.. hahahah.... but its fun... anything that comes from the bottom of the heart is well treasured for me...

Merry christmas to your lovely family!