As per the title of the tag...it's all about the Husband...and our story, I reckon? LOL...

We don't have a picture as friends 'per se' since we met the old fashion way...online...ha! But we have some pics when we first met. This was taken in Tagaytay...on the 3rd day he was here and the day we were flying to the US. Yep, we met in person and have been together eversince....no sense in spending time apart, right? Sorry, the picture is a bit dark...I had to scan it since this was before the digi cam craze... 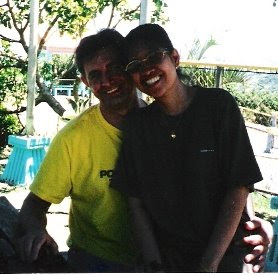 We met twice...online and in person....and I remember both times very clearly! [Long story of how we met here...]

I obviously thought he was good looking...enough for me to send him a message. When we finally spoke on the phone, I thought he was very gentle. In person, he looked just the way he said he would...shy! Very sweet...

--> Were you attracted to him?

Physically, obviously! I sent him a message, didn't I? But I wasn't expecting the relationship to go as far as it did. I was just curious...and now I'm married...with a 6-year old to boot...

--> Were you friends before he became your bf?

Friends? Not sure if you would call it a friendship...but there's something...not quite sure what to call it. We 'connected' let's put it that way.

--> What was the sweetest thing he did for you?

He married me? Hahaha...how about traveling to the Philippines, his first time ever out of the US, to meet me and the family. His family was against his travel plans because news of foreigners being abducted were rampant at that time. He did anyway.

--> What are the things about him that you are thankful for?

He is very hardworking...responsible...faithful....ambitious [and he does something about it, too]...and a nut case [in a good way]. I can't imagine being married to someone who cannot make me laugh. That would be one boring life, eh?

Here are a couple more pictures... 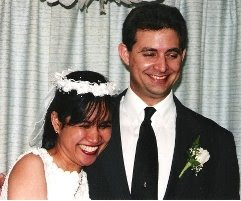 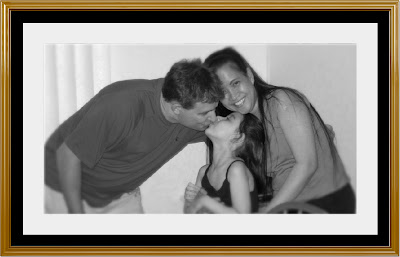 Now, who do I tag??? How about...Umma, Ate Beng, Cathy, Darlene, Eds, Honey, Mitch, Ruby [PinayMommyOnline], Ruby and Juliana. How about that ladies? Care to share how you and hubby got together?
at December 17, 2008

Email ThisBlogThis!Share to TwitterShare to FacebookShare to Pinterest
Labels: Life and Anything in between, Tags

hello mommy, thanks for doing the tag! Your family is so cute mommy!!!

Ahhhh... thats the magic of LOVE Mommy J..no matter how distance separates you, God will find a way if it is meant to be.

Super guapo naman ni hubby mo, he looks so sweet and loving. No wonder ur little princess is a stunner.. beauty runs in the family... what a great combination.

Hi Mommy Jul. Will sure to do this one. Thanks for tagging me!!!

How's you week so far. It's not as cold here today but wet. All the from yesterdays's ice are now melted.

Oh, I forgot. I love all the photos. Sweet nyo naman.

Jules, thanks for posting your love story :-)i loke it!

what a lovely story as well as family you have, not to mention a good looking husband, daughter and of course, Mama :-)

I will give u a buzz te when I'm done.. muaahh!

Thanks so much for this. I do appreciate being tagged by you. I've been tagged already but haven't posted yet. 'Will do this soon.

i had to come back kasi medyo nalito ako. you said "his 3rd day here and the day we were to fly to US" -- you mean he fetched from Pinas then got married in US?

hi mommy J! thanks for tagging me on this one. i have to find the pics for this tag coz they're hiding somewhere. :)

Beautiful photos! You have a lovely family Mommy J!

Have a great Thursday!

I was tagging you with this as well, wasn't really sure if t'was sent through...

wohooooo , love is in the air hehehe... love the latest pic, so sweet!