That's only of the names being suggested if the time comes that the state of California will be split into 4 different states. Say what??? Well, it's just an idea for now. California's economic crisis is played so much in the news that we don't really know anymore what's real and what's not. Anyway, the idea was of course brought about by this economic brouhaha in that state. "CaliFARMia" is being suggested for CA's agricultural region while "CaliDORnia" is being suggested for the 'bedroom communities'. Insteresting, isn't it? But...it's only playing is some people's imagination out there. The 'so-called' know it all [read: experts] are not buying the idea. I kinda' agree that it's far-fetched idea...maybe now...but it's still a possibility right? We'll see what's going to happen to one of the biggest states in the country... 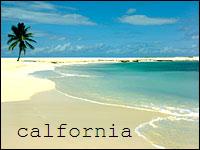 crazy! so where would disneyland be? walang mga magawa!

anyway, i would probably not come over in december as may-june 10 ang balak ko in time for my niece's sweet 16. mag-drive ka na kasi!