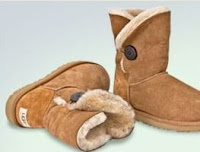 ... and it's going to be the most awaited day of the week...Friday! Yay! But before that happens we have to get through this day first, right?

I'm still pretty busy with work but never too busy to do some online shopping...tee hee. I've never owned a pair of ugg boots but it seems I'm always asked about them by my nieces. I told them I really don't need boots where I'm at because the weather don't really call for boots even during the winter time. Out of curiosity I asked them why they're so interested in them anyway. They are in the Philippines and if I don't need boots where I'm at, I just don't see the reason why they would. They said they're just curious but I know it's more than that. I have a feeling they want ME to buy a pair for myself. Why? Because I usually send shoes back home that I no longer use. Since I barely go out of the house, more often than not, my 'used' shoes that I send are barely used.

The only question is....will I ever buy me a pair of boots anytime soon? They don't look too appealing at the moment. What with the temperature going us high as the upper 90s? I don't think so....maybe later this year.
at July 29, 2010

Email ThisBlogThis!Share to TwitterShare to FacebookShare to Pinterest
Labels: Boots, Life and Anything in between, Shoes