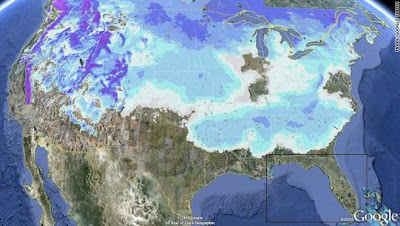 .... state in the country that didn't have snow on the ground yesterday. That's our state. Even Hawaii had snow in some high mountains...but the sunshine state...nah! I guess we're 'lucky'?? Not according to one little girl here. She'd rather see snow...LOL.

According reports 71% of the country had snow yesterday and none of it hit our grounds. Some had it worse than the others as shown by numerous cancellations and delays of flights...again.. As for our dear state, we're actually on 'freeze warning' for a couple of days now. Temperatures are in the low 20s I think although the feel like temperature outside is in the teens. Even with temperatures that low, there is no report that we will be experiencing [probably] a once in a lifetime experience for most of us here.

On other news....not much going on. Some news, eh? Well, I'm busy with some work but that's about it. As usual we don't have any plans for the weekend. But it's always subject to change...

i think you're lucky, but like your little one said, it's nice to experience snow din. grabe, i've seen in the news last night, kapal ng snow sa ibang states dyan.