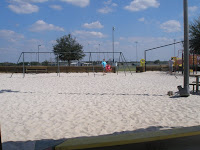 I didn't want to let such a good day pass with us cooped up in the house so I dragged the other 2 stooges out of the house so we could enjoy it together. There wasn't a lot of struggle on their part when I 'dragged' them so I guess they were up to it as well. eh? LOL...

Our first stop...a park near our place. It's mostly a park for sports and there were games being played while we were there too....soccer and baseball I think. We didn't watch the games...instead we let the little one ran around this mini-playground in the park while we stayed under the shades in the sandbox. I took this picture of my father-daughter tandem while they're on the swing. See how blue the sky is? No clouds in sight at all.

After staying in the park for more than an hour, we decided to look for a place to feed our hungry 'pets'. We ended up to Ruby Tuesday which I chose because I want to eat some of their buffalo shrimp quesadilla. It became one of my favorite dishes since the husband introduced it to me. We were all stuffed in the middle of our meal so we decided to head home right after and skip on the dessert. Besides we still have some cake left from our 'party' last night.
at February 27, 2011