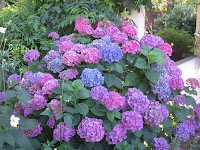 This is a picture of hydrangea plant. We bought one for our flower bed about a month ago. According to the guy at the store, the plant needs partial sun so we thought it would be perfect there. It doesn't seem to be the case because we noticed the plant's leaves starting to dry up. Also, the fertilizer we were told to use was the wrong one so that may have contributed to that as well. Still, hubby decided to transplant it in the backyard where it can only get about an hour of morning sunlight.

We're hoping it will thrive where it's at. If not, we may just return the plant to the store. We only have a small one right now unlike the one in the picture but it didn't come cheap. Since we have a year's warranty for it, we'd rather return it before it dies on us. I'm hoping though that we won't have to do it because I really like its pink 'bouquet' life flowers.
at May 03, 2011