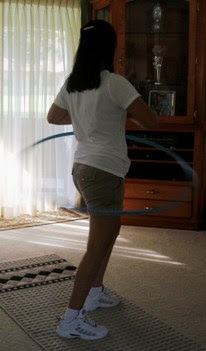 Yep! I'm trying to put some new spin in my 'so called' daily work out routine....hula hooping. That's me this morning in the middle of our living room hula hooping for about half an hour.

Hula hooping was my original choice when I started thinking about losing my 'spare tire'...you know...the one in the mid-section that just wouldn't go away? I was thinking it's the perfect way to do just that since my mid-section will be doing most of the exercise. But that plan went kaput. I 'hula hooped' alright but only until the little one learned how to hula hoop herself. At least something came out of that first attempt, eh? The little one is now a pro in hula hooping that she even demand some one on one face-off with me....LOL.

Anyway, I still picked it up every now and then in the last few months but only for fun. This time though, I'm thinking of doing it at least 3x a week for about 30 minutes to an hour....while watching TV. I am hoping that after a few weeks, I would at least see the spare tire getting a wee bit smaller....fingers crossed of course.

nax ang taray! I wanna do it too. pero maliit lang bahay namin.....hmmmmm. baka mabasag lahat! heheh. i miss you. friday na! i think it conked out last friday!

Saturday na... time to have some fun!