The Art of Shopping?

Sadly, I haven't mastered it after all these years. Boo hoo to me, eh? I just don't have the 'genes' for it. Or maybe I lack the practice? I don't really know actually.

But fear not...it seems that the genes I lack when it comes to 'this art' are abundant in my 'successor'.

Let's see. When I go in a store, more often than not I have a purpose. I have to buy or look for something I need...and sometimes 'want'. I don't normally walk in a store without an 'aim'. That means as soon as I walk in, I know where I'm going...like last weekend. I was looking for belts & shoes [typical? LOL]. I realized when we went to Orlando that I didn't have any decent belt so when we went out last weekend, that's what I was looking for...and I found it. Of course the little one and the big one [aka Dad] were with me...and whenever I have to shop for something for myself, the two of them usually wander around the store [because I don't want them breathing down my neck when I'm 'shopping']. Letting them wander around on their own??? NOT A GOOD IDEA! Let's just say Dad likes to find cute stuff for his little princess. Mind you, he also does that to me so that's nothing new. Last weekend was no exception. So while I was busy browsing/looking for belts, the two of them were busy looking at everything else. It's a good thing we went to store that sells inexpensive [cheap, if you may] stuff. Why? Because when I was done choosing my belt and was about to pay, here's what was 'shoved' [well, handed...aha!] to me along with yet another scarf. 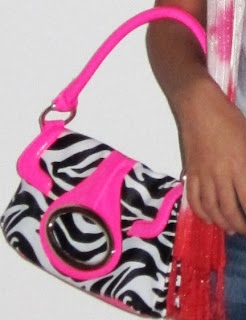 So now she's walking around with this little purse with 'zebra prints with hot pink' accents. Oddly enough you will never catch me sporting something like this. I guess the saying 'a fruit doesn't fall far from the tree' does not really apply to us in this case, eh?
at October 18, 2011