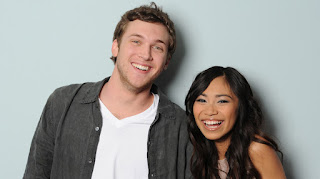 The last 2 standing on American Idol Season 11. I must say I wouldn't have it any other way. Joshua is a good singer but his style of singing can be irritating to the ears sometimes. I feel like some veins in his neck would pop everytime he tries to hit those high notes.
I must also say that the judges were overly generous with him whenever he sings. I just don't see why they have to give him a standing ovation as much as they did. But that's their choice and I think it may have hurt Joshua in the end resulting to his elimination. But then again...the last 2 are equally talented.

So who's going to take home the crown next week? Philip? Jessica? I don't think anyone can tell right now. As far as voice quality is concerned...it's Jessica for sure. The voice of that girl is just totally out of this world. But American Idol is not just a singing competition anymore. It's the whole package now. Philip is the more appealing of the two. And I'm not just talking about the looks...err...I am actually. LOL. Seriously, he is a musician. He can sing, play the guitar and just be cute. Ha! But unlike Jessica, his voice is only suited to sing centain songs. I guess we just have to wait and see then who's going to be the next AI champ then. But since they've come this far, they're obviously both deserving to win. But regardless who wins, both of them will land a recording contract....just like the past several seasons.