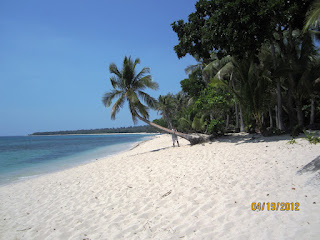 This is Saud Beach in Pagudpud, a small town by the northern tip of Ilocos Norte. It's a long drive from where we're coming from but it's well worth the trip especially if your aim is to enjoy the beach all by yourself. Aha! I have not been to Boracay or Palawan so I can't really say this beach is better but it's definitely comparable. We only stayed for a couple of hours to check it out and eat lunch but it's long enough for us to decide that if ever we'll get the chance again, we'll definitely stay there much longer. Since it's not as known as the other 2 places ~ Palawan & Boracay ~, it's not very crowded. As a matter of fact, it was just us and a few others [less than 10?] when we were there. Granted that was a Thursday, it's still amazing & surprising how very few people were there at that time. I'm pretty sure the beaches in Boracay & Palawan were probably bursting to the seams with people on that exact day & time. The accommodations are also very reasonable as well as the food in the resto [which is by the beach itself] we ate in. I'm just hoping that if and when we decide to go back there, it won't be too crowded just like this time.
at May 14, 2012