The summer capital of the Philippines. That's probably the most popular tag for Baguio. For people who don't like the heat [aka 'the husband] but has plans of moving to the Philippines one day, Baguio is probably the perfect place...with Tagaytay a close second. I lived in Baguio for a few months when I was still very young [around3 or 4] and all I could remember is how COLD it was there when we were there. Unfortunately, that's the memory that lingered in my mind for the longest time. Thus making me 'dislike' the place so much so that during my college senior retreat, I opted to travel back to Manila as soon as the retreat ended....even if it meant arriving in Manila at 10 o'clock at night. Yep, that's how much I disliked the place back then. Just because it's "cold"!

Anyway, when we were making plans of visiting the Philippines Baguio was a definite 'must-see' by the husband...well, more like 'must-feel' actually. We planned in staying there for a couple of nights because a 'friend' insisted she had accommodations available. I was hesitant but she was persistent so I agreed. Sadly, that plan fell through and never heard from that 'friend' during the duration of the road trip. I feel [yep, still] somehow disappointed because I never knew her to be someone who breaks promises but she did. I would have understood if she called to tell me there's no place for us to stay instead of just blowing us off like that. But such is life. I gave her the benefit of the doubt and waited for her to at least contact me before we left but she never did. Now....I've given up on her explaining why she did what she did. It's her conscience, not mine.

Because of that unfortunate event, I decided to change the plans...yes, I was planning the road trip. From La Union, we still drove to Baguio as planned except I decided that we would drive back home afterwards instead of staying overnight. I told the gang about the plan and they all agreed. We were all tired to the bones already anyway. It would only take a couple of hours from where we were in La Union so if we left early enough we would be there in no time. But since we got in late the night [well morning actually] before, we left the hotel a wee bit late. We still made it to Baguio right around lunch time. We drove around the city proper to see some of the famous parks. It was a Friday and everywhere we went was packed to the brims because of picknickers. Every square meter of the parks had occupants on them probably because it was lunch time. So we just drove around to get a glimpse of the different places.

We stopped at a couple different places before heading to lunch. The first stop was of course the Grotto. I remember this place so much because I had one blown-up picture taken beside the statue of Virgin Mary at the Grotto when I was a little girl. Nowadays, that statue is off-limits and there are grills around it to prevent people from getting close to the Grotto itself.

Here are a couple of pics the hubby took of us going up the stairs leading to the Grotto. 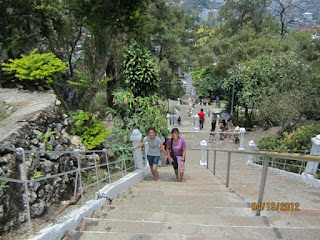 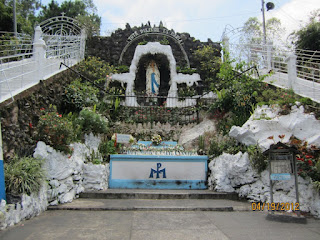 From the Grotto, we drove by the Botanical Garden which was closed due to renovations. But there were still some people in front of the gate for picture taking. What do you know, the place is overflowing with BUSINESS PEOPLE [aka Igorots[?] in their native clothes]. We decided to get off our vehicles for some pictures and as soon as we posed for a picture [the 3 of us], we were 'swarmed' by them...every single one of them. Here's the proof... 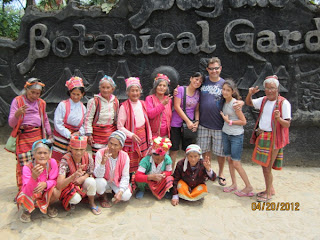 We were fine with 2 or 3 but they couldn't be stopped. After 2 'clicks', they had their hands outstretched for their professional fees [?]. That actually took me by surprise. They were practically shoving their hands in our faces to pay them. I almost didn't just because I got irritated by the way they were acting...but I paid.

After that 'traumatic' ~ LOL ~ experience with the natives, we decided to look for a place to eat. As expected, restos, fast foods and even the carinderias were full. Our guide/driver decided to take us to this little diner that serves a lot of American food. The inside was packed so we decided to eat outside of the diner. They set up some tables/chairs for us and we were good to go.

For our last stop, we went to walk around Burnham Lake while my sisters/nieces went to the vegetable stands for some cauliflower/broccoli. The little one was fascinated with the boat rides but we decided not to go on one because of the time constraint. So we did the next best thing...picture taking. Ha! 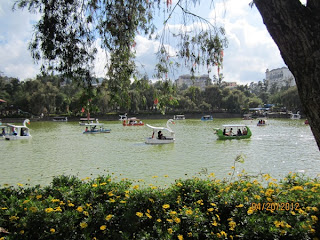 One of the things that got the husband's attention while we were on our way to Baguio were the houses built on the side of the mountains/hills. I guess he's wondering how the occupants of the houses are able to sleep at night knowing they're practically hanging off a cliff. He took a bunch of pictures but very few came out good because we were on a moving vehicle while he was taking the pics. Here's one of the better shots he got. 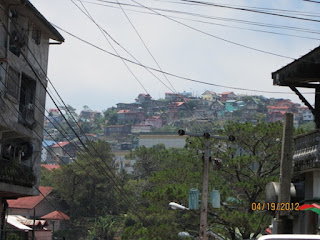 That concludes the 5th and final day of our road-trip. It was definitely a lot of fun but very tiring. Will I do it again? Probably. The next time though, I'll make sure I'd plan everything differently. Like making sure we have a place to stay in each destination...and not depending on other people's empty promises.
at July 03, 2012

By the way, add me sa FB. I changed account - www.fb.com/pinaymommy Thanks!!!

na-home sick tuloy ako just by looking at your pics.

enjoy your weekend. take it easy.