The Stairs to Amicalola Falls

This is a continuation of my earlier post about Amicalola Falls.

The point of entry we took to see the falls is the one on top of the falls. I'm not sure if there's another point of entry but there probably is one. We just didn't know about it since it's our first time and we're not familiar with the place.

I don't know about you, but to me the best way to view or look at waterfalls is from the bottom. Since the POE we took was the one from the top of the falls, we had no choice but to go down in order to see the falls....ummm...'falling'? Well, that's easy. All we have to do is to take the stairs down...all 425 steps of them! Here's how a part of the stair looks like somewhere from the top. Unnerving? Scary? High? 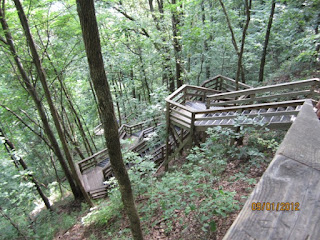 I didn't even want to look down as we were taking the steps down because it scares the beejeesus out of me. The little one is not quite used to going down stairs...much less this many steps....so she either had to hold my hand or hold on to the handrails or for Daddy to carry her down the long and winding road...err stairs. It took us twice as long to get down just because of that.
As we reached the 'almost' bottom, this is the one that greeted us. 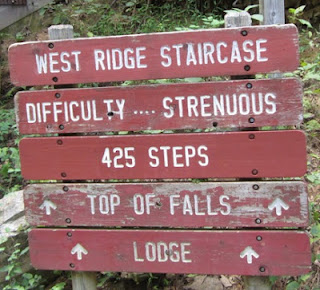 I *think* we reached the 1st of the 425 steps but there are additional steps going somewhere else. We decided not to take them anymore since we could see the falls 'falling' from where we were.

Still, it's worth it because we burnt some calories [badly needed because we started eating like truckers after that] and because of this.... 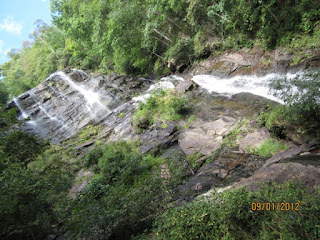 Going down the stairs of course was a lot easier than climbing it back up. But it has to be done. We did it [obviously] with numerous stops along the way. I actually started to feel dizzy on our way up so we had to stop more than usual. Hubby even had to leave us behind to get me some water [which we forgot to take with us on our way down] from the car. The little one got a bit worried with me getting dizzy so I had to reassure her that I just needed to rest for a bit and I'd be fine. Ironic, eh? Next time, we'll take it slow and easy...and we'll bring some water with us. Ha!