It's Monday! And it's been a while since I last posted here. Not much going on so I didn't have much to say actually. But there were a couple of things that happened last week.

First, trick or treatin'. We have a 'tween' in the house now but she still likes to do this annual thing even if we only take her to the mall to do it. It's been some kind of a tradition since we've been doing it eversince she was a few months old. There were a couple of years when we weren't able to go to the mall to do it because of scheduling conflicts but she always had a costume no matter what. She likes dressing up so why not.

This year, she was 'Cleopatra'. She enjoyed it if only for the eye make-up I put on her...and of course the lovely costume she wore. As usual there were quite a few people at the mall where we always go for this kind of thing, mostly senior citizens watching kids parade in costume. A few complimented the little one which made her very happy. She was a bit uncomfortable though because she seemed to be one of the tallest among the kids. I'm pretty sure that more than half of the kids there were either her age or older than her but she certainly looks older because she's towering over them. But we always make sure to assure her that there's nothing wrong with her being tall. It's funny because when you watch her in line, she looks like an adult lining up. Only when it's her turn and she starts waving her hand 'hi and bye and saying thank you and bowing' you'd realize she's still a kid. I'm quite proud that she's very polite. Never forgetting to say 'thank you' and 'bye' to the person handing out the candies. She also doesn't like to cut lines even if a bunch of the kids would do it...in front of her. Anyway, we went home with a bucket half-ful of candies.

That's basically what happened the past week. Oh wait...there's one more thing...I turned a year wiser as well. Yep, another year, another candle. We didn't have any party. I'm happy to let the day pass without any noise. We had the traditional cake....but this year the hubby didn't have to go out and buy it. And no I didn't bake it either. It was a gift from a dear friend....mwah! Here's a picture of that delectable cake... 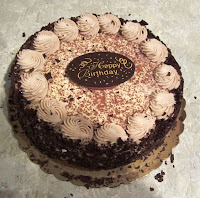