Finally! Something we can do that's right in our neighborhood.

A few months ago we noticed what used to be an empty piece of land was being prepped for something. At first we didn't know what they were trying to do with it. Then we started seeing some crops growing on it. The crops were growing faster than normal so we kept on guessing what they could be. We thought they're corn but they were too close together and it wasn't making sense to us why someone will grow corn that way. Then a few of weeks ago signs started coming up saying that there's a CORN MAIZE being opened. That's when it all started coming together. The crops are indeed corn but not the regular corn we know of. These corns are planted not for their kernels but for a 'maze'...which was opened to the public a couple of weeks ago.

Yep, we have a corn maize right in our neighborhood and that's a first since we moved here. It's kind of cool because we didn't have to drive far to find something to do last weekend.

So after lunch last Sunday, we decided to walk over there. Yep, we just walked. It's not that far and it's a good way for us to see our neighborhood on foot. We've never done that actually. We've gone around a couple of times on our trikes but not on foot. Anyway, there was a crowd there already since the place opened in the morning. We walked around first to check what the place has to offer . There was face painting, some food stalls [hotdogs, bbq, etc] and a train ride for kids. We didn't do any of those. After a few minutes of walking around we decided to do the maize. We were given this 'Maize-O-Poly' as we entered the maize and the map of the maize itself. 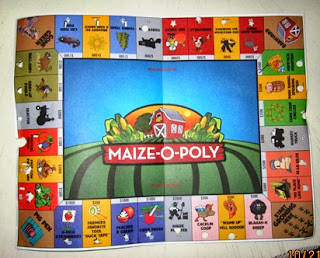 ﻿
﻿
We were supposed to punch holes as we come across those pictures...and punched we did because we came across all of them. Hubby was leading of course because if I led, we would have never made it out...haha. Anyway, we had fun going around it. Hubby wanted to get lost so even when the clue says 'left', we'd go right. As a result, it took us twice as long to find our way out. The little one had fun because she likes adventures like that. The only complain we had...it got too hot so we were drenched in sweat when we got out of there.

One of the 'corn cops' said that before they close it late next month, they're going to hold a 'night maize'. He said it would be pitch black with only the required overhead spotlight. That means that we will need flashlights to find our way around the maize that time. Somebody got really excited upon hearing that. Clue: It's not me. Ha! Oh...the corn cop also mentioned that come Spring, they're going to plant some sunflowers for yet another maize. That I can't wait to see....
at October 22, 2013

That was an exciting trek you had there. I'm interested about that sunflower maze. I think that will be awesome. I love sunflowers!