It's December? Really? It seems like I went to sleep sometime in June and woke up and it's December already.

When I was younger December couldn't come any faster. I was pulling the days that's why. Now that I'm no longer a child, it seems to come in a flash. Why is that?

Oh well. That's life, eh? Our little one is of course super excited that it's the Christmas season already...much like when I was young. She kept asking us before Thanksgiving when we're putting up the tree. The usual answer is after Thanksgiving. Well, guess what? She came to our bedroom early Friday morning with the question: When are we putting up the tree? It's after Thanksgiving already. Huh? Thanksgiving is over? Anyway, the tree was still in the attic on Friday so I just asked her to wait until Daddy gets the chance to take it out of the attic.

Saturday came. I asked her if there's anything she wanted to do. You know like go out and shop. But her reply was: Yes, to decorate the tree. Ummm...it's still in the attic.. LOL. I guess Dad got the hint and decided to go up there to 'release' the tree...and the trimmings. Haha! As soon as it's out of the box, she went down to work. Just like the past several years, we let her decorate it the way she wants to. When it's done, I could tell our little one has grown. Yes, she still gets excited about all these special holidays like a little kid but she's also starting to show some kind of maturity somehow. This time by the way she decorated the tree. Here are some pictures of the same tree during the last 3 years... 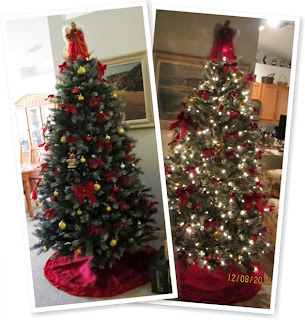 ﻿All 3 of them are decorated by the little one and look 'almost' the same...except this year, it's not as heavily decorated as the other 2. I asked her why and she said that there's no more space.  Oh well. I guess she likes the cleaner look now that she's almost a teenager. Sigh.
﻿
at December 02, 2013

Heniwey, as I wrote earlier, wala pa din kaming tree. Now the mama is more excited than me. Mukhang ang ending namin neto ay walang tree. Just thinking of the maintenance of a live tree is killing me.