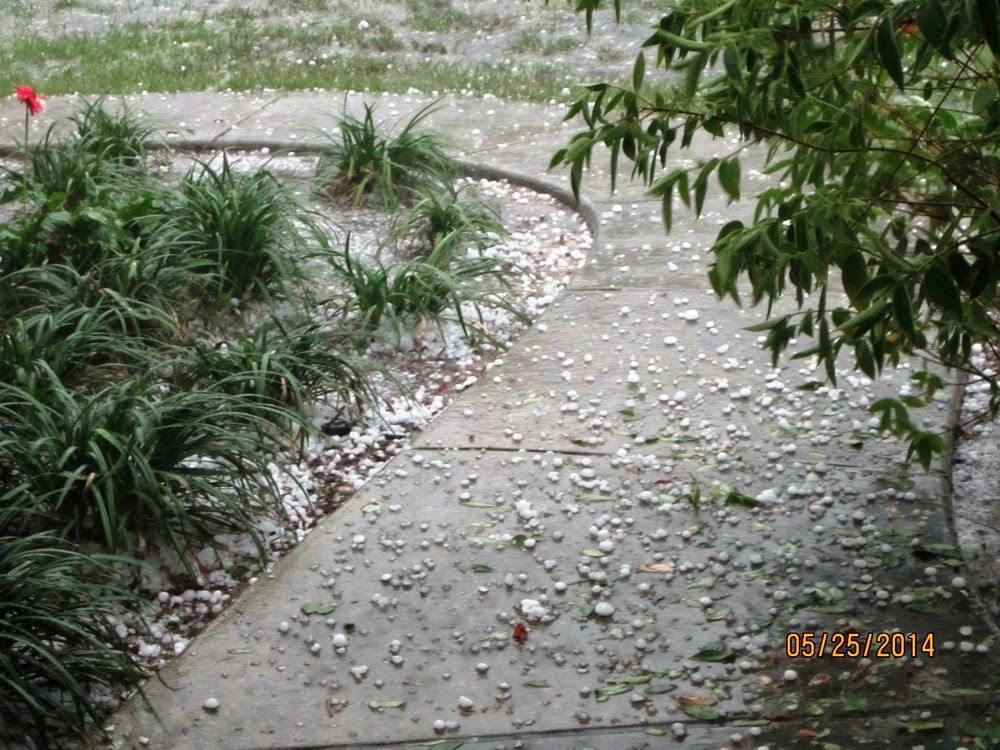 That's what's by our front door yesterday afternoon...around 5:30. It's something I've never seen before here in our neck of the weeds. Well, there's one time when it hailed here but it was teeny weeny hail like the size of a grain of rice and it only lasted for a few minutes. We had to search for good sized hail then so we could take a picture of it. Yesterday, we didn't have to search for it as you can see.  This time around the hails were much bigger, maybe the size of a quarter for the most part but some were bigger. It lasted for a good 15 to about 20 minutes. It was kinda' fun and exciting at first but when it started to drop like we're being attacked, it got a wee bit scary. It felt like gravel was being poured on our roof at one point. I didn't know where to go to get a good look at it because it was also raining hard.

Our polonia tree in front got pelted so bad that a lot of its leaves have holes on them now. Its usual perky demeanor is gone today because the leaves that have holes on them are sagging now. Below it are all the leaves that didn't make it through the storm...dramatic, eh? We stood in the garage for a few minutes to watch it happen and also to make sure our car in the driveway is not being 'attacked' as badly as the polonia tree. If it was, hubby was thinking of moving it somewhere in the backyard. Good thing it wasn't. It survived the 'hail attack' I must say.

Some of our neighbors' yards got flooded a little bit as well. The roads also had some water on them. I thought our yard would also get flooded but thankfully it didn't. There was a little bit of water in the backyard but not enough to flood it. When the water subsided from the roads, it's all littered with leaves and limbs. Right now it's still a bit messy out there with all those leaves and limbs that fell during the hailstorm.

Some news on TV reported that some places had golf ball sized hails. I'm just glad it wasn't the case here in our neighborhood. I don't think our car would have survived golf sized hails.

What can I say. It was an experience I probably wouldn't forget anytime soon. I hope it doesn't happen again,