The man of the house had to work on both days over the weekend. For whatever reason, the little one decided to make me breakfast on one of those days ~ Sunday to be specific. I was actually awake already when I heard the clanking of the pans in the kitchen but decided to let her do whatever it was she was doing. After a few minutes of just listening to the 'activities' in the kitchen I decided to peek out of my bedroom and saw her busy on the stove doing something ~still in her nightgown. I asked her what she's doing. Her reply: "I'm making you pancake for breakfast." Uhm, okey. I'm normally hesitant to let her use the stove but I let her this time since she already had a head start and she seemed to be in control. I went to wash up while she was doing the finishing touches to her 'pancake breakfast'...especially for moi!

When I got on the breakfast table, this is what she had waiting for me. I, of course, had to take a picture of it...for souvenir...and to show Daddy. Aha! 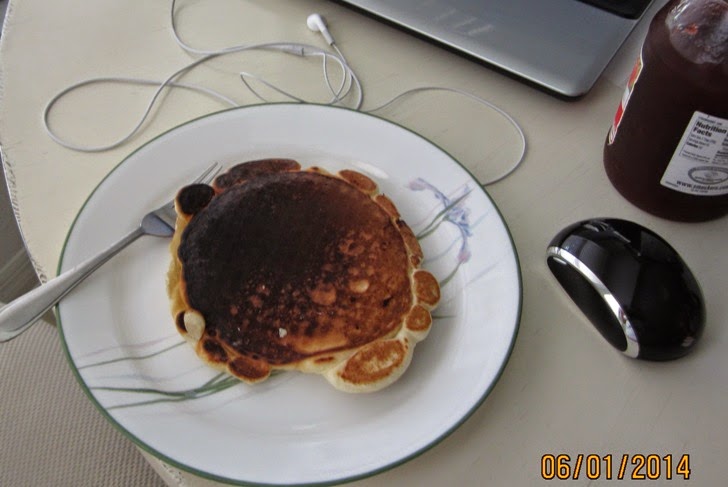 That's her first 'unsupervised pancake'...and she's kind of proud of it. Kind of because she knew it's a bit burnt on one side but I ate it nonetheless because she made it for me. While we were eating she was telling me about her foray in my domain...without me hovering. Apparently she miscalculated her batter because when she poured my pancake batter she noticed that it's a wee bit small. What did she do? She decided to whip up more batter and hurriedly poured it on top of the one cooking already. That's the 'fringe' that you see on my pancake. That's also the reason why there was still some 'uncooked' batter on it. Oh well. She has to learn sooner or later, right? At least now she knows how to make pancakes all on her own....sorta'.

I'm not sure when she's making me my next breakfast but I can hardly wait...I think. Hopefully it will be as good as this one if not better. Maybe I'll tell her to make Daddy breakfast for Father's Day as her present for him. Hmm...now that's an idea.
at June 04, 2014

oh, wow! you now have your own chef in your kitchen! nice of you to let her do it on her own.. for sure masarap pa rin yan kahit slightly burnt. cooked with love eh!