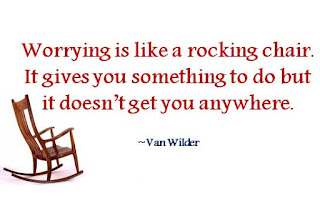 Ain't that the truth? But it is so hard not to worry. I worry even for the simplest things. That is probably one of the things I want to be free from if I can. It's been proven time and again that most of the things I worry about are not worth...umm, worrying about. But I can't help it. I'm trying my best to stop myself from doing it but I still find myself wide awake sometimes,yes, because I'm worried about some things that are either unfounded or beyond my control.

Anyway, enough of that. I should focus on the positive things instead of dwelling in a the negativities that worrying brings with it. I have a lot to be grateful for. So let me start with that.

Life around here has been relaxed most of the time. Work has been rather busy for me lately. I think last month was the busiest ever since I started with this job. I'm not sure how long it's going to last but I'm taking advantage of it as much as I can. I have a feeling it won't last forever while also hoping that this would be the norm now. But like I said I'm not putting much hope that it will be like this forever. Hubby is also busy doing his thing. Work is not crazy busy for him but still busy enough to occupy him. He is also pursuing a passion which is flying. He just started so it's all in the early stages. He already had lessons and he still has about a thousand and one more to go. As for the little one....what can I say, she's growing up real fast. She's still the same sweet little girl although between the 2 of us, I should now be the little girl...since she's towering over me.

Right now I'm happy with things. I just hope that I get over this 'feeling' I have. With prayers I'm sure I will.