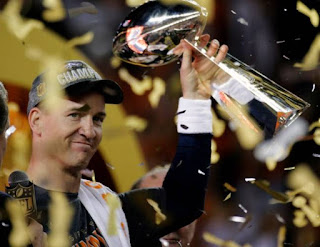 That's the Denver Broncos alright...and that's Peyton Manning of course. He's the only reason I'm rooting for this team. I must say that I only know a couple of his team mates since I only follow his [and some other QBs] game/performance. I was really hoping the Broncos would win if only to see him retire on top. Now, his retirement is not a sure thing yet because he wouldn't give any definite answer yet but I'd rather he retire...tee hee. I actually thought he would retire last year. But he decided to come back and now he's able to get that oh-so elusive ring for the second time. I'm really keeping my fingers crossed that this is it for him. I don't think my heart can take another season. Yeah...I get nervous everytime he plays. I actually didn't watch SB 50. I can't even watch him play during regular season, how much more during the big game itself. Anyway, congrats Mr. Peyton Manning and the Broncos. It's a well-deserved win.
at February 15, 2016