As expected, the elf was not very happy at first but it didn't take her long to get over her 'not so pleasant' mood as the little one jumped, cheered and posed with her 'loots'.

For her final loot, Santa took her on a 'treasure hunt'...at 7 in the frolickin' mornin'. It's a good thing it's just in the house because if it was outside, the elf would probably throw a fit. LOL...not really.

Anyway, she got an 'old map' to follow and look for the so-called 'treasure'...

Here she is trying to follow 'the map'...with a little help from Dad. 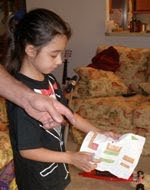 After looking for a few minutes, she finally found the 'treasure chest'...yay! 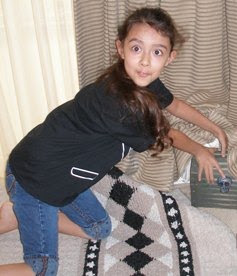 What could be in the treasure chest??? How about...

some [not so] gold coins 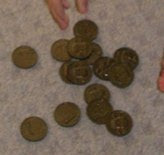 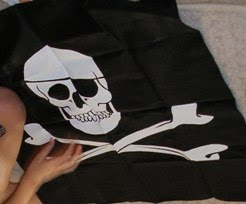 And something you don't normally find in a treasure chest.... 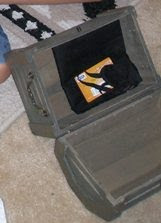 Email ThisBlogThis!Share to TwitterShare to FacebookShare to Pinterest
Labels: Christmas 2009

one lucky girl. Santa is indeed very generous! now, where is the playhouse stationed? and that scooter, mukhang pang adult na ang size at ang tangkad na talaga ni E. you can probably take it on a spin yourself.

nope, hindi ako namalengke at 3 weeks na akong hindi nagluluto hahaha. I only go there now for fruits and lots of them.

Your daughter is now a lady, a pretty young lass, but definitely still a child at heart, enjoying her Christmas presents. Happy New Year to you and your family!

You have a cute daughter. She must be thrilled finding a Visa card there.

we're not getting any break at freezing pa din dito. I was home all day today cleaning.tiring but buti na at gumagalaw para pampainit na din.

What an exciting way for E to receive gifts! Ang dami ah!

What an exciting way for E to receive gifts! Ang dami ah!