After a 1-day/2-night stay at Fort Ilocandia, we went our merry way to continue the last couple of days of our 5-day road trip.

We were planning in leaving Fort very early but we decided to take advantage of the free breakfast at the hotel so we won't travel with empty tanks. So instead of leaving very early, we left around 8 in the morning. Destination...Pagudpud! But since it's a road trip we had some stops to make along the way, right? And our first stop was "Bantay Abot Cave". 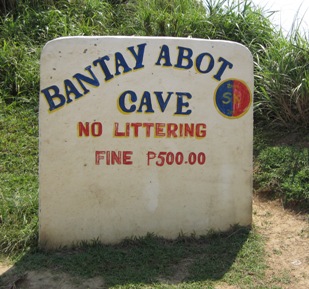 For a regular tourist, this probably won't be on the list to visit. But we're IRREGULAR tourists so...need I say more? Anyway, it's not even a real cave. It's just rock formation that looks like a mouth of a cave. Here are some pictures so you can see for yourself what I'm talking about... 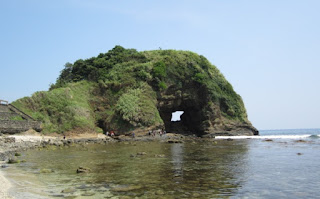 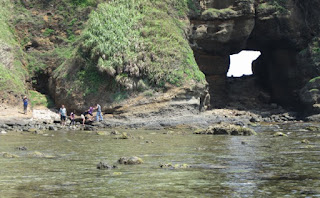 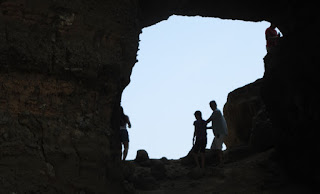 You have to go down to see the cave then climb back up to get to the cave itself. Hmmm...I wonder why they wouldn't just make a passage that takes you straight to the cave. Anyway, I went down but didn't climb to the cave. I let my father-daughter do that and be the photographer instead. The little one was fascinated by the rocks and some rock formations there so they spent some time exploring before we went to our next stop which was this 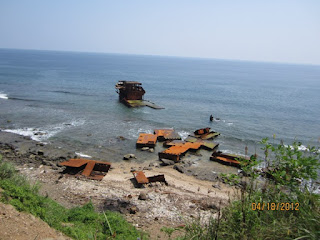 Hmm...what could it be? It's actually a sunken ship. Apparrently, it's a Taiwanese ship that docked along that shore for shelter but was stranded instead. The husband read about it somewhere and wanted to see it in person. See how excited he is??? 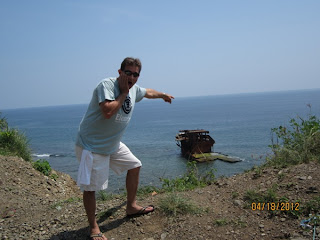 Yeah right! He's just hamming it up....just like always. Maybe he was an actor [a very bad one at that?] in his former life.

Anyway, after making those 2 stops along the road we made one more stop before lunch. We checked a resort which shares [I think] the same shoreline as the the famous Saud Beach. It's called 'Hannah's Beach'. We were only there for a few minutes. Just enough time to get a brochure and have some picture taking. This was taken from the driveway of the suites/apartments of the resort. 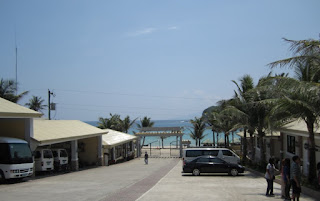 Nice view, eh? The rates were okay I guess. But if you have the dough to splurge I recommend you get the presidential suite for a little less than 30 grand PHP.

A few miles down the road is the more famous Saud Beach. 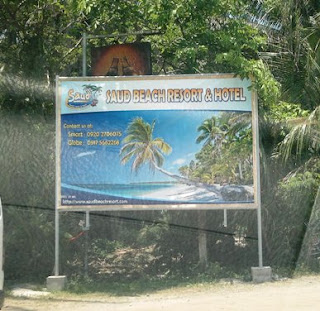 Unlike the other resort, there were very few people here. I don't know why. The other resort is more like a public resort I guess so people flock to it. I really have no idea why because this place is much better looking if you ask me even if they share the same shoreline.

Anyway, we decided to have lunch in the Resort's resto. The food was resonably priced and it was good. I guess that's partly because we were literally starved when we got there. We also inquired about the pricing of their villas and other rooms. It was affordable as far as pricing goes. The only problem was we didn't actually see the rooms so I'm not really sure how they look like or if they're worth the price. Still, with the view they have of the beach...I'd probably bite...

As soon as we finished eating, we did what true tourists do in situations like this. Take a bunch of pictures...of course! 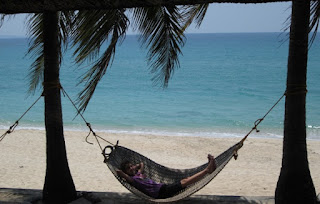 The little one relaxing in one of the several hammocks strategically placed in front of the resto overlooking the beach itself. You can just jump into one after filling up and nap....just like what our little 'bakasyonista' did! Well, she didn't actually nap...just posed. 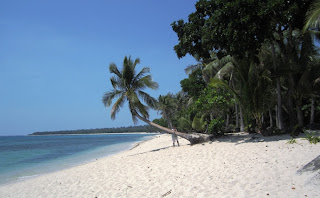 And there's the 'poser' aka my beloved husband. You probably can't see it in this picture...but he's doing the 'Mr. Pogi' pose here...you know the 2-fingers under the chin kind of pose.... 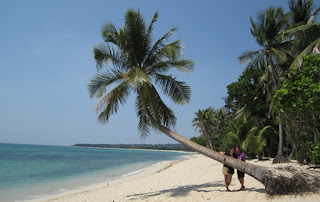 Of course we won't be outdone....Mommy and the little one posing by that fallen coconut tree that we see in the resort's banner.